After an incredible run from local band Karkosa including big headline shows, a UK tour, reputable support slots and even sold-out shows in South Korea, it’s sadly time to say goodbye to the indie-rock group we’ve all come to know and love since 2013 when they first emerged. This month, the band have released their final single ‘Waving From Mars’ as well as announcing their final show.

The Birmingham band are set to go out with a bang with a headline show at one of the city’s favourite indie venues, Mama Roux’s on Wednesday 21st July with support from Monty Taft, The Creature Appeal, Jack Cattell and La Dharma. Despite the sorrowful undertones of their final goodbye, the band stated “we can’t wait to play one final show and it sure is going to be one hell of a good night!”

As well as the closing-curtain show, Karkosa have delivered a treat in one final single which may just be their best yet. ‘Waving From Mars’ is said to be inspired by the likes of Declan McKenna but you also hear the influence of Catfish and the Bottlemen and indie-pop group Whenyoung, with the anthemic chorus, raspy vocals and stadium-ready guitar tones. 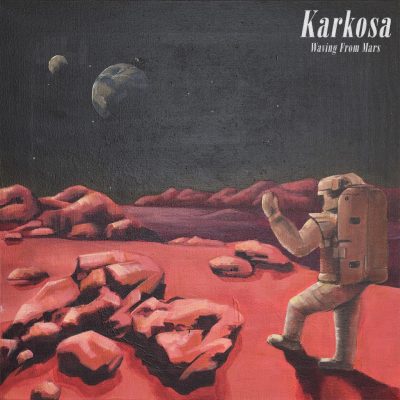 On the track, the band say they “felt far away from the person I wanted to be in my life” having been written by frontman Michael Warnock as he struggled through the trials and tribulations of national lockdown, an all too-familiar feeling, right? The irony isn’t lost on us either as Warnock sings of missing a loved one as he quite literally waves goodbye to the band he’s been a part of for the best part of the last decade.

The way Warnock’s vocals break before the drop further pushes the emotion behind the lyrics with the band’s expert songwriting and instrumentation complimenting each other beautifully.

The backing vocals by former bassist Isabelle Florence add a sweet touch of sentimentality to the already emotive lyrics as the final chorus builds into a brilliant crescendo. The way Warnock’s vocals break before the drop further pushes the emotion behind the lyrics with the band’s expert songwriting and instrumentation complimenting each other beautifully.

Realistically, it’s always a sad day when Birmingham loses a band and Karkosa will not be an easy one to get over for many. Hopefully they’ll return in some form or another and until then, a well earned best of luck to them all.