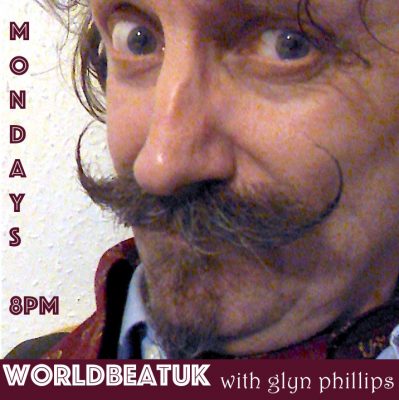 Glyn Phillips is passionate about the music of the world!  His two-hour weekly show, WorldBeatUK, brings you the latest releases and peeks at forthcoming albums from around the globe – the sounds of five continents, innumerable islands and a multitude of cultures – all presented with enthusiasm and a desire to share his knowledge and new discoveries!

WorldBeatUK takes you from the favelas of Brazil to the forests of Finland, from the heart of Africa to the very edges of Asia and from the shores of the Caribbean to the urban high-rises of Europe.

With record labels and artists from around the globe sending him new releases almost every day Glyn literally has the world at his fingertips and guarantees you’ll hear something every week that will whet your appetite and pique your curiosity!

There’s a decided emphasis towards the continents of Africa and Asia on this episode with a look at some of the last maestros of the Zimbabwean matepe mbira, an exuberant Beninese band made up of girls between 11-17, a taster of Korean music to flag up the K-Music 2020 festival and an album with a green, planet-saving message from Madagascar.

There are international collaborations between Germany and Korea, France and Korea, Germany and Morocco, and a three-way split between Armenia, Georgia and Anatolia, as well as UK Indian fusion, Taiwanese experimental fusions and a new album of global fusion! Take a chance on something new!