A few weeks back I had the pleasure of meeting up with Katie Stevens and Michelle Holloway of the Bonfire Radicals; Sat in Sorrento Lounge, Moseley, surrounded by the joint’s trade mark cluttered and majestic decor. They shared the low-down on their journey from student jammers at the prestigious Conservatoire, to leading the charge in one of the most eclectic yet little known bands in Birmingham, and a few bits in between; they spoke thusly… 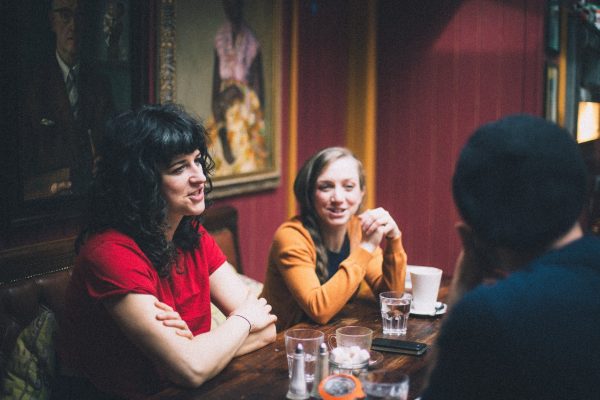 ‘I came here [Birmingham], wasn’t enjoying it the first few months, said to myself I’ll stay ‘til Christmas, and ten years later…’

‘None of us are from here originally, this is my thirteenth years here, Pete and Andy have been here forever… about thirty years, Sarah’s been here a long while too.’

‘The band has changed so much. The band that it is now, even though some of the tunes might be the same ones we did on our very first gig (8-10yrs ago) ,  they are so different, even if the parts are similar, the people have changed, and every time somebody joins the band we’ve really spent the time to make sure they feel part of it. It’s their music as well, even if it’s something we’ve done before hand, like when Andy joined, our old guitarist was more into finger picking on his acoustic guitar, then  Andy came with his electric guitar and his pedals… we try to make sure we incorporate everyone’s interests into it.’

‘When a new member arrives it changes shape. It’s really consolidated over the last year, and it feels like a really solid band, now that everyone wants to be in it, with the same sort of purpose. There were eight of us at the beginning, and everyone had different feelings, but now we are all going down the same path. We’d all been part of, Joe Broughton’s Folk Ensemble, at The Conservatoire; that’s a module you can take when you’re at college. I liked folk music, thought I’d go along, and that’s where it all began.’ 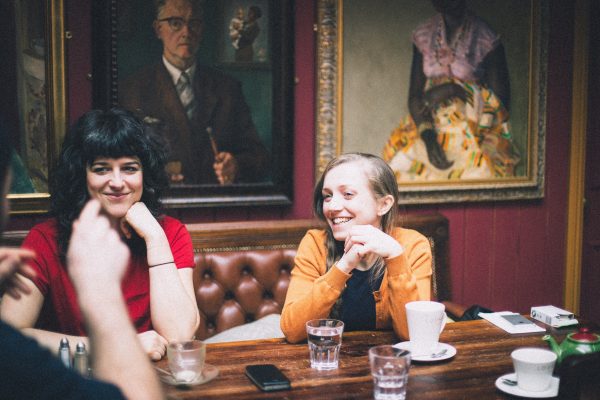 ‘The band brought together different people’s interests and influences – my interests are that of Balkan music. At the beginning I played a lot of  Klezmer, which is Jewish wedding music, which eventually led me in the direction of Bulgaria, and now I go there every summer and learn Bulgarian music. There’s lots of different types of traditional Bulgarian music, the singing will blow your mind – notes stacked upon notes that you’d never think would go together, but it comes out really strong. The instrumental music is really cool too, it’s characterised by really strange time signatures, strange to us, but over there it’s normal, instead of 4/4, the dancers and their rhythms are 7/11/13 and all sorts of complicated groupings of notes. They all just feel it.’

‘We last played in November, over in Bearwood, and before that, The Kitchen Garden [Kings Heath], last year, and that was amazing. There were about seventy people all squeezed in, and we’re a big group as it is.’

‘We all take to our own influences, the things we are interested in, for example Balkan and Irish Music, Baroque Recorder. Ruthie our previous Violinist is from Scotland so she brought that Scottish influence. Sarah our Violinist now is into experimental sound stuff, so she brings a lot of interesting ideas. Andy our Guitarist used to play in the band, Gong. He brings his really weird and wonderful psychedelic soundscapes. Pete is a Bach enthusiast, plays the Accordion and the Organ, and Ilias is really positive, and really wants to do all the things. He’s from Greece and really likes traditional Greek music. That’s a lot of different interests in one bowl. There’s a lot of musical bases covered there. What we’ve always tried to do is get people to bring ideas and we’ll create something together, no one really writes something completely on their own, we all bring a fragment of an idea and we can all make it into something that’s uniquely ours. It’s a group thing and we’re all contributing to it.’

‘We wanna play as much as possible, more festivals, would love to play Moseley Folk festival again, we played there once when we first began. I always wanted to play with The Destroyers, and last year we played with them for their album launch, and now I am a Destroyer, along with Pete and Sarah too. We’d like to play with bands like Dorcha, it’s nice to see Female led bands in Birmingham doing their thing.’ 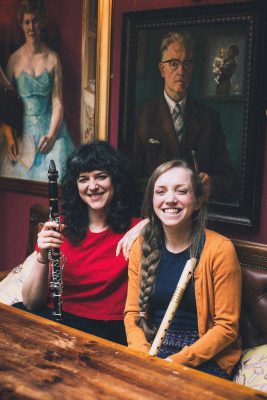 ‘We’ve been together quit a long time now and so we’ve played in a quit a variety of different places, we used to rehears at my old house, I was a property guardian at an old school in Highgate, and I had a whole classroom to myself, which meant we had a lot of space for storing gear and rehearsing. We had a lot of rehearsals there but it’s all gone now, the building was special, had a really unique history. But the whole building got demolished and now they’re putting up a bunch of flats.’

‘I think if you’re up here as a business person or earning a lot of money’ there’s a real disconnect with the lives other people are living here. It’s easy to get sucked into this bubble, not realise what’s going on around, and these people don’t understand that certain places are vital, I like to give them the benefit of the doubt that they truly can’t understand all the things going on around here, but when you’re so stuck in your own circle, it’s really hard to be challenged. The best thing about Birmingham is meeting so many different people, working in lots of different places, meeting people from all kinds of walks of life and seeing how that interacts, I definitely didn’t have that growing up outside of Birmingham so I feel really lucky to have that now.’

As we finished up the interview, I mentioned that it had recently been the Persian New Year celebration, Chaharshanbe Soori and that we should jump a bonfire, as is the tradition, to rid us of bad vibes. We took to the street outside, lit piece of paper between two sticks and took turns leaping the void. My cohort, Jess grabbed some choice snaps before we all inevitably parted ways. 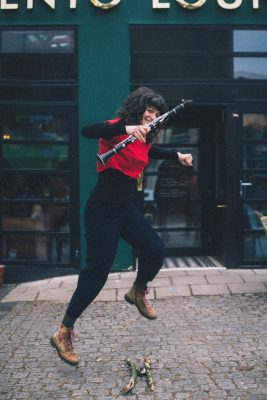 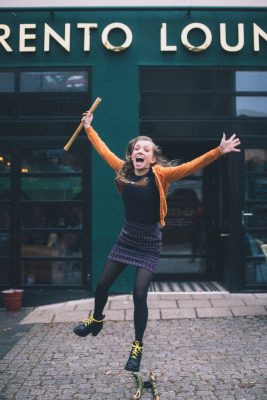 The day of their gig arrived. I turned up one song late to a packed gig room, the smaller of two stages that live upstairs in the locally infamous Hare ‘n’ Hounds pub in Kings Heath. Jess was already in the zone, waltzing around another photographer at the front of the stage, her lense attempting to capture some part of the truth behind the magic. I shimmied through the crowd and reached the last available inches of space in between the bar and an ominous sound desk. The room was cut almost in half by a great big pointless curtain, hence a crowd of forward-facers, conflicted due to a lack of space to move to this folky, Celtic, jazz, funk fusion filling their hearts with an insatiable desire to boogie… alas, the energy manifested instead as a shoal of swaying bodies and half-cocked arms doing the booze salute. I wear my ‘wall-fly’ eyes as I jot down a perception or three of it all.

Intense and soulful riffs cry out of Andy Bole’s Electric Guitar. He is sagely dressed and smooth with his groove. Sarah Farmer shreds her fiddle in harmony with Katie Stevens and Michelle Holloway whose storms of notes and punchy, punky vocals, take turns to narrate the journey. Bassist, Pete Churchill, and Drummer, Ilias Lintzos, drive the rhythm train to the sounds of the whistles and strings. 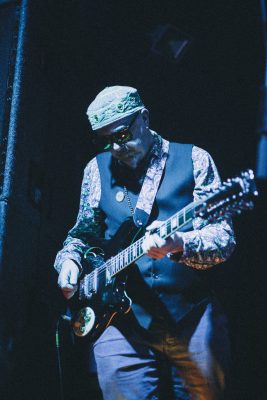 The controlled mayhem between upbeat tempos and complex timings divulge the bands tightness and levels of skills. The room is in a trance. A tie-dye peacock banner looms behind the happy go lucky band as they point their instruments here and there, dancing, playing and singing their hearts out. It felt like I’d seen all of this before somewhere, in some strange dream; a band of pied pipers casting musical spells…and the sardine can faded away as the room shed it’s confining angles.

There was a short break, the band re-emerged, Kate elated at the crowd – “Thanks everybody, you came back, I love Birmingham! Anyone know how to do a Scandanavian Polka dance?”

Suddenly, we all did, Polka dancing, up the walls, on the ceiling, swept into the whirling energies the band produced. Next came a solo flute and Pink Floyd-esque bass, followed by Eastern European scales weaved with Celtic fiddling, and whistling fit to charm a bed of snakes.

‘I wish I wish….‘ laments Michelle. A single Bass note hums from behind her as she engages her inner Siren, regaling a tale of woe. Soon our ear holes meet Middle Eastern tones, a screwdriver in place of a Slide and Glissando style finger work echo around us. In come scatty, jazzy ‘babababa’s‘ out of Sarah and Michelle. Again they switch it up to smooth moods, dropping the tempo. As we are lulled into a weightless state, only to be thrown up in the air again, spinning through an interwoven web of clarinet and recorder outbursts.

They create ghost endings and twists that cement shock and awe to the faces of the crowd; now fully hypnotised, they sense the final curtain and protest the announcement of  the last song.

The band thanks the house sound, which is always exceptionally spot-on at this venue. They kick back in with a nod to traditional Jewish music, a rapturous Ska-mitsva style that turns the room into wobbly limbs and moshing torsos.

An anticipated “Encore” roars across the room, the band prepared to play on with a ‘Balkan divorce dance’. Shoulders are mounted, upside-down and horizontal dance moves stomp across the floor, walls and ceiling. As the last note is hit, the room is filled with cheers, and one by one the audience seems to disappear into the smoke-machine mist. I look around and see that only the band and a few close friends are left in the room. The punters have all vanished (as it’s a Sunday night), through the stairwell out into the streets of Brum. 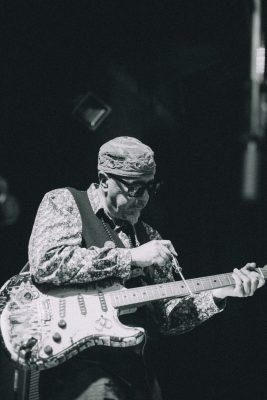 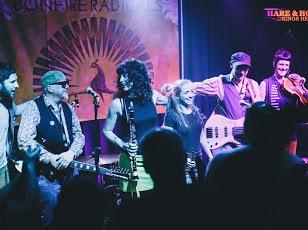 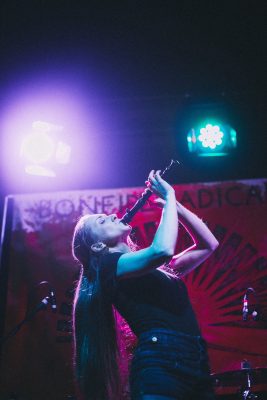 I congratulate the band on their performance, and make a hasty retreat, evaporating in adoration of their skills and charm as I drift on.

These folks have an incredible knowledge of music that allows them to merge styles in just the right way, thriving to create unique experimental compositions out of traditional methods, and doing so with a magic that leaves their audiences flabbergasted. They will be musically radicalising the locals at the Red Lion Folk Club in Kings Heath on Wednesday 8th of May.