In early 2017, outside of Birmingham Central Library, a very frustrated fellah in the midst of a political protest managed to get himself into a stand off with Brum’s very own, Saffiyah Khan. As she displayed a charming and calming example of empathy (with a hint of fearless nonchalance) toward his angst, local press captured the moment in a photograph which spurred online global recognition and interest towards the teenage activist… who just so happened to be wearing a particular band T-shirt that would change her life forever.

I’d befriended Saffiyah during the initial haze of her viral infamy. A few gigs, a dinner party, and a number of random street bump-ins later, I heard the news that local legends, The Specials, wanted to record a song with her for their new album.

A year passed, and it was out there, on the line, the first record in 40 years from The Specials entitled, ‘Encore’, featuring ‘The Commandments of I, Saffiyah Khan’.

It was a tough song to groove to at first, the seemingly political nature of the lyrics were jarring. However, this Beat poetry response to the famous ’10 commandments’ by Prince Buster left me intrigued and impressed by the telling of an unconventional perspective, a trope The Specials famously champion. This song incorporates modern, experimental SKA verses, with dreamy somewhat signature Specials bridges, delivering Saffiyah’s poignant message.

Every Track on this album is a meticulously crafted gift from their generation to this generation, delivered with a maturity and honesty that shines a certain optimism, whilst holding little back in way of criticism of negative attitudes.

After I had managed to swallow my jelly heart, I recalled a story I’d been told once, by the late local legend, Mike Horseman, about his friendship with the band.

Saffiyah had told me she was due to go gallivanting across the states and Europe on their tour at the end or March, and so I got in touch with Mike’s wife, Carol Maye – Makeup artist and co-conspirator of scenes beyond our wildest dreams. A meeting of the minds was set and before I knew it the morning had rolled around, our pilgrimage began.

We arrived at Carol’s house, ventured into the kitchen and sat at a table around which many have gathered over the years, joining the ranks of lucky mad hatters who have had the privilege of knowing Mike and Carol. Saffiyah and I listened attentively as Carol shared with us a few memories, eventually laying out the rough details of the story surrounding Mike’s Organ. 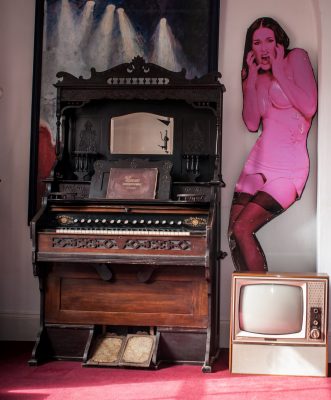 The gist of the story is that certain members of The Specials would visit Mike, and tinkle on his old Organ’s keys, working out the notes to one of their most famous songs, homage to the Coventry and Birmingham music scenes, ‘Ghost Town.’

After our thirst for nostalgic gossip had been quenched, and Carol and Saffiyah had become sufficiently acquainted over a few cuppas, Carol gave us a tour of the house, leading to the Organ upstairs in their Studio, and in true Mike and Carol fashion, we took a few photos whilst playing fancy dress. Our cohort, Elliott Taylor, managed to focus in on us just long enough to get the right shots as we posed away.

Eventually we had to say our goodbyes, thanked Carol for her time, the tea and stories, and Saffiyah, Elliott and I headed off to the Medicine Bakery on New Street to chat on the record about Saffiyah’s budding career. I began to shoot the questions before our food came, and luckily (as I hear she doesn’t like to be interviewed) she spoke thusly about how her song came to pass and how she felt about it’s message, amongst other thoughts:

‘They [The Specials] played outdoors with Toots and the Maytals at the NEC, last summer, and Lynval, the guitarist, his wife got in touch with me on Facebook and said ‘would you want to come down to the gig?’ I took my family along, it was a great gig, one of the best ever. We said hi to them afterwards and that we’d stay in touch…Terry got in touch with me later…I’m not a phone person, so we met in person, near Morgate Hospital by Old Street in London, where I was working at the time. We caught up a bit, spoke about music and life, two tone culture; what it used to be and what it’s become, and the difficulties that all generation involved with it have faced.’

‘I  had just been writing and going back and forth with Terry with ideas.  I didn’t meet the others again until we recorded at some recording studio somewhere in London. The first practice was a long while after we recorded it [TCOI,SK]. I had recorded it with a really basic beat in the background and then they mixed the song into it. The first time I ever heard the song I got a call on Whatsapp whilst I was in Thailand. It was Lynval, who was in Seattle at home with his wife, and they’d had a listening party, the mixed version had just come out, but hadn’t been released yet.’ 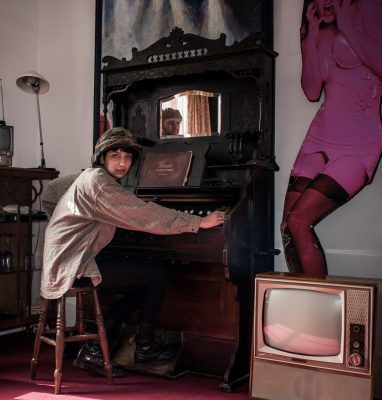 ‘It’s a response to the Ten Commandments by Prince Buster. They asked me to write a song…. I’m generally suspicious, but they gave me some great inspirational musicians to listen to. They [The Specials] wanted me to do a response to the #MeToo movement, and I’m generally suspicious of people using that angle to sell things. So I thought a lot about the words I wrote, not so they were too deep, but so they didn’t fall into that trend. There’s nothing in there that’s too radical. They originally asked me, a number of times, to write it as the Ten Commandments of  I, Saffiyah Khan… given to Man! …and I didn’t want to do that, so there are lyrics in there directed more at the law and countries and interpretations of religions that are misogynistic, rather than just at ‘Men’. It alienates people, puts a weird complex in feminist allied men, that they are in the wrong from the get go. It’s depressing to see a man self hate for no reason. Being threatened by feminism , it’s some weird deformed monster that’s grown somewhere along the way, and it is dominating the mainstream media and the commentary of feminism at the moment. It’s difficult for people who aren’t readily looking for another solution. There’s a movement that’s been around a long time and was created by working class women and women of colour and has it’s roots in a very different place, people feeling threatened should look for that side of it.’

‘The fact that I’m from here, it’s been less of an aggressive disagreement, there has been a lot of things said about me, but Brummies have been quite vocal in the comments, and that’s really nice; Brummies shining through. I can see that we aren’t so divided here.’

‘I’d like to see more lawless spaces, DIY independent spaces, something where anything goes. We’re really lacking that in Birmingham, Art spaces. A lot of  things happening at the moment aren’t really gritty, they are all a bit too polished, and I understand you have to do that, cause you have to make money, but it’s not exciting and it’s not really doing anything by way of culture for Birmingham, or my generation who are starved of doing big things, especially when you look back at people like Carol and Mike, and how much they got up to, and the effect they had. I think things are a lot different now, there’s not the same creative Agar.’

‘I got into writing when I was really young… I don’t think getting this gig has much to do with my writing though. It’s my social responsibility, and all the things I didn’t like about people that taught me. I don’t think I got anywhere from hard work or a discerning talent. It was pure chance, and a lot of things helped me after the chance. The Sunflower Lounge  asked me to DJ ages ago, and then my friend had some decks in London, which I tried while I was there in between working and meeting up with Terry. The Specials asked if I could, I said not very well, and they didn’t care, so they asked me to DJ on the Tour.’ 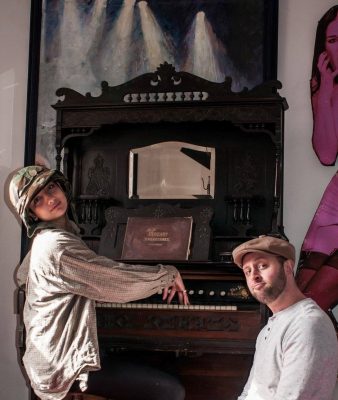 ‘Working with The Specials, and being from Birmingham, I feel incredibly proud. It’s a really big thing. I don’t believe in music being centralised to London. Even bands who have made it big and maintained their pride in where they come from in other parts of the country, seem to move there or shoot music videos there, work with producers and mixers from London and I’ can’t stand that, so it’s nice to work with a band that are closer to home.’

‘Aside from my rapidly declining charisma, I think I’m marketable, in the day that we live in, I have the face of a big brother is watching you poster, and I’m always very dead pan, I could be saying anything, but I’m not, I’m saying nothing.’

I asked what she had done in preparation for the tour, to which she replied, ‘I’m gonna get my eyebrows threaded.’

Saffiyah and The Specials have thrown down a modern music gauntlet with their collaboration, showing they have what it takes to define their genre with confidence and thought provoking style. Set to educate and inspire Europe and the US over the next month, I look forward to their returning show at The O2 Academy in Brum on April 26th, and to any more tales Saffiyah decides to share with us of her unique journey with the band.