Moseley Folk Festival is firmly established as a major presence on the city’s musical landscape, which is why it and its sister festival, Mostly Jazz, Funk and Soul, were so sorely missed last year (for understandable reasons of course). There was always a risk that a well-attended but compact event would be vulnerable again, but the organisers pulled it off – by making it bigger.

The addition of ‘and Arts’ to the event’s title and the expansion into another of the tennis courts to create a new spoken word area is a bold move that reflects the way Moseley has quietly and confidently moved slightly beyond its core offer of the last 15 years – international, national and local artists, not always folk, but always big draws, alternating between two adjacent stages so there’s never long to wait for music. The addition of ‘Folk on the Slope’ in the last few years has broadened the festival’s offer without losing what makes it unique.

Given all the artists on offer over a weekend blessed with good weather (Moseley has never really ever got washed out though) it’s almost impossible to take stock of them all. I arrived on the Friday to see Brum Radio favourite Alex Ohm step on to the main stage with aplomb offering heartfelt, cinematic soundscapes to wake up the afternoon.

Alex was one of many local artists who made their mark. Later that day it’s the turn of two ‘veteran’ acts to get the crowd livened up for the weekend. The Wonder Stuff need no introduction of course and familiar hits from their three-decade-plus career are delivered with aplomb by Miles Hunt and co. Miles is in good form, delighted to be in his home city and playing to live audiences again – something that is true of all the artists to be fair, the unloved age of Zoom gigs finally in the past. The other ‘veteran’ band are The Nightingales who have recently been rediscovered by a new generation thanks to the recent ‘King Rocker’ documentary. Their sharp, angular post-punk set tees up a surprisingly enjoyable headline from The Waterboys, much more raw and tighter for me than on their last appearance here.

Saturday on the slope features local acoustic stars Katy Rose Bennett and Chris Cleverley whilst on the bigger stages there’s a sunny set from another Katy, as in J Pearson, whose West Country Americana-pop is perfect for the day. She’s joined by local consumer expert Joe Lycett on tambourine for the song what he directed the video for (Miracle), resplendent in Mr Egg sweatshirt (there’s a lot of these about, thanks to Rotunda Industries). Gruff Rhys is reliably, compellingly quirky and engaging and Frank Turner headlines with a blistering almost-one man and guitar array of emotional, sometimes political, well-crafted songs. 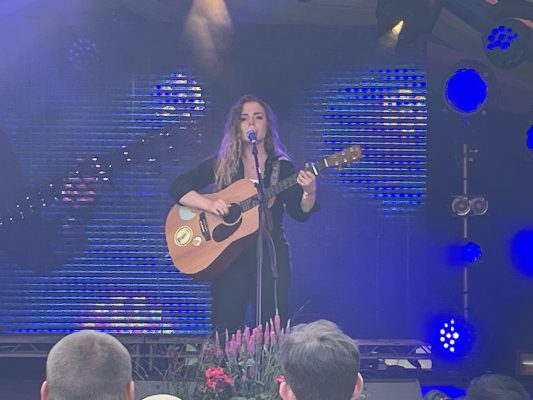 The Sunday is hot and sunny and perfect for another Brum Radio favourite, Katherine Priddy (pictured), showcasing her album ‘The Eternal Rocks Beneath’ to more than the socially distanced crowd who gathered for the album launch event in St Paul’s Church earlier in the year, and who are all in awe of her songs’ quiet power. Passenger really engages the crowd too with his I-can’t believe-we’re-here humility and heartfelt songs, whilst Dexy’s legend Pete Williams precedes the headliner with a multi-layered, soulful set. There’s a touching tribute to local legend and UB40 saxophonist – and festival supporter – Brian Travers before a rousing, warm and funny Richard Hawley performance to round the weekend off, laden with hits and wit and the revelation that The Spotted Dog in Digbeth is, for Richard, the second-best pub in the universe. And who wants to argue with him?

Sometimes different, reliably the same, Moseley Folk and Arts made a triumphal return to its place rounding off the outdoor music summer.