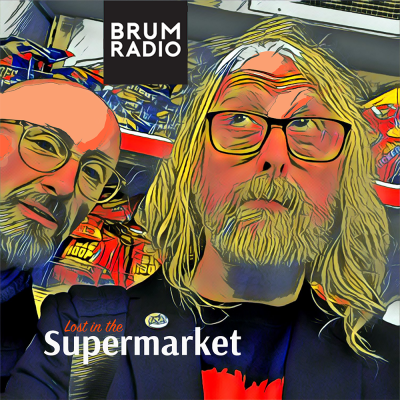 Lost In The Supermarket

Sunday nights at nine is the time for Lost In the Supermarket with Mark Badgeman and The Wolf, playing hits and misses from the alternative eighties and underground nineties. Not much after Wonderwall if we’re being honest.

Badgeman is a bestselling author and the former promoter of The Kidderminster Market Tavern; the legendary nineties indie venue and, “youth club for degenerates,” that played host to early shows from Radiohead, Sebadoh, Carter the Unstoppable Sex Machine and countless other big, big bands. Wolf is the unpopular musician and comedian behind The West Midlands, Winter Olympics and Wolfpack of One. He has excellent hair.

Join them each week for a staggering mix of indie rock bangers, unsung local heroes and pitch black gothic nonsense. Oh, and gags. A surprising number of actually funny gags.

This week, for Thanksgiving weekend, listeners are going to be thankful that your chuckling chumps aren’t on for longer as they declare it Cyber-goth Sunday, roll out some turkeys and heat up the left-overs for a 61st great week.

Expect: hits and misses from Scott Walker, Fretblanket, Five Thirty and (checks notes) something called ‘Mr Wipey’s Day Trip to Guildford’ (yeah, me neither). Plus – a top celebrity guest calls in (spoiler: it’s Graham from the Inspiral Carpets).