An audience of fold-out chairs faced a projector screen and stage area. Musical instruments were poised and ready, as a classy, mature, after hours wine bar crowd rolled into the joint; Centrala, a semi industrial, whitewashed, minimalist unit at the back of Digbeth’s Minerva works estate.

It had been a Birmingham minute since I’d seen Ted, a ‘nom de plume’ for Matthew Edwards. He was booked to perform songs from his up and coming Album ‘The Birmingham Poets’ with his band, The Unfortunates. That same weekend, his Californian, CEO, Poet, Mink’s front-woman, wife and mother of his child, Jennifer Edwards, was due to become an official Brummie by law. I received a call and was to catch up with them at the gig. 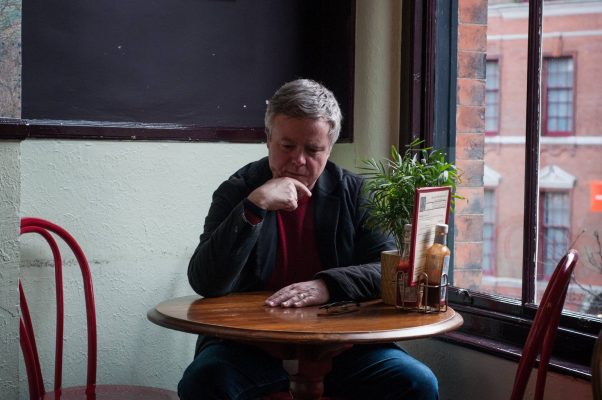 I get there early, and proceed to become the furniture. Ted enters like a returning long-lost-lad, shroud in an ocean blue corduroy suit, and instantly begins to lark about with a few small groups of folks.

The opening act, local singer-songwriter, Danielle Cawdell brings the room to a forward facing silence as she set out on keys to unravel her inner indie-soul vibes in verse. Friends, Kirsty Griffiths and Lauren Debney gradually join her, sliding between drums and guitar and harmonies adding texture to her songs.

The stage lights dim, heads turn, and on the projector screen, a black and white photograph of a street corner lends an avant-garde backdrop. Ted is a silhouette as he strums, his deep Brummie accent emerging from his shadow.  It’s a homely local folk sound, with foreign gems of influence.  Craigus Barry on Guitar and David Roberton on Keys, softly help craft the musical soundscape. A mouth organ and alternative English-Blues Folk’n’Roll hooks fill the room. The band are conducted by Ted as he seamlessly builds the performance from slower melodies to upbeat tempos, the regular drummer Derick Simmonds unable to make it, confidently filled in for by Ilias Lintxos, bringing the beat with Bassist, Bobby Cotterill. 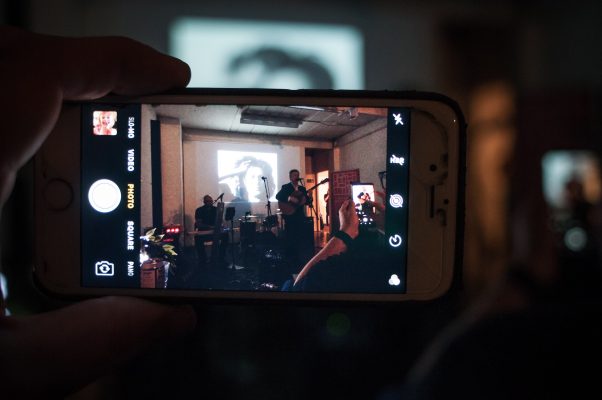 Ted’s songs take us through a life of triumphs and failures, his dry wit and poetic subtly adding to his status as Brummie folk legend. Eventually, an ‘encore’ is chanted. The band re-appear, having left the stage to the roar of the rabble. The evening ends in a wiggle to the outfits latest single ‘California, Can You Wait?’ Goodbyes are doled out as the band packs up, and gently bumping into one another becomes the final, final dance. A kooky Polish gal I had just met led me away into the dark, the nights musical magic – a spell on me.

Before I knew it the next day’s February sun was in full beam, and I’d managed to find my way to The Rock ‘n’ Roll Brew House, in the Jewellery Quarter. Ted’s wife Jen had pledged her pledge, and was now an official Californian-Brummie. We all celebrated by draining the kegs and closing out the place, by seven PM. The previous night had clearly caught up with us all as we Ubered off to our respective haunts.

Ted had asked me if I would catch up with him a few days later, for a word on the record, at a photo shoot with our mutual pal, photographer, Elliot Taylor. Two days pass and we reconvene at the infamous Cherry Reds Cafe, on John Bright Street. We managed to commandeer a reserved room upstairs for an hour, and so Elliott shot away as Ted and I knocked back a few. This is what the gent had to say to say for himself. 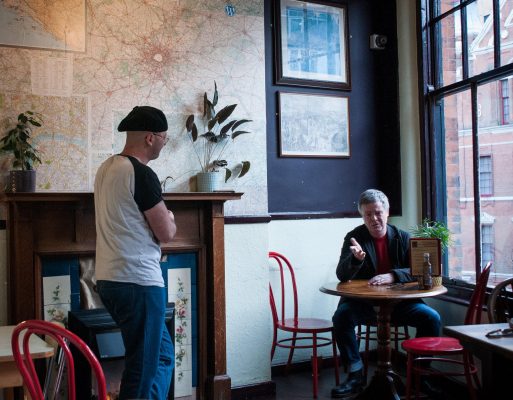 ‘To me, Birmingham is home. I lived in California for twenty two years and I’ve never felt more at home than I feel in Birmingham. I understand Birmingham, and I love Brummies, I love the soul of the place. Some people don’t understand it, but being here is very inspiring to me. Generally, Brummies will talk to you, whoever you are, whether you want them to or not. Which is great. They often have stories to tell, and I come from a tradition of people who like ‘the gab.’ My mum and dad, both came from singers and orators, which is how I grew up, and to me is a very Brummie thing.’

‘I was born, and brought up in Small Heath. Born on Bolton road. Brought up on Cooksey Road. Lived there til I was 18. I went to Bordesley Green Grammar Technical School for Boys which at the time was widely known as the roughest grammar school in Brum. It was where they would send the clever lads that nobody knew what to do with.’

‘I had bought a guitar from the shoe repair shop when I was about nine, for two pounds, messed around with it, didn’t really do much, but then, when I was in my later teens, I started hanging around with this punk rock band called The Dumb Dumb Boys.  I was just the kid that hung around, and one day their singer didn’t show up for a rehearsal, at a socialist workers book shop in Digbeth, so I got up with the band and did a couple of Lou reed covers, and the drummer, Roger, had told me, ‘You can sing, you can sing!’ That gave me my first boost of confidence. Shortly after, back in school, me and my mate formed my first band, Dance, but the popular music scene was mostly in Moseley at the time, and we were Boiks,  salt of the earth, working class lads from Small Heath and Bordesley Green, so didn’t really get involved in all that. It was a very multi-cultural society growing up in the late seventies in Small Heath. The music I heard outside, Blues parties every Saturday night over the road, and the reverberations through the gardens and over the fences, it all stayed with me. It’s been a great place to grow up. We would watch bands like T.V.Eye, upstairs at The Crown. I really loved The Prefects as well, and The Specials. As soon as I started going to shows, I wanted to go often, you could bob around the city. I was working, sweeping up in a bakery, and I had to convince my mum to let me go out.’ 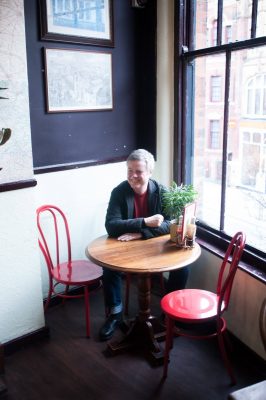 ‘I’ve had The Unfortunates for about seven years now, six or seven. I started it after my last band, Music Lovers dissolved. I had a desire to play with completely different people, I wanted a clean break, and had just come to the end of a contractual obligation. I was signed to the label called The Grand Majesty out of Detroit. I made three albums with Music Lovers, and when that contract was over, I decided to do something else, which became The Unfortunates.  I had an American line up of The Unfortunates to start with. The first Unfortunates Album was ‘The Fates’, which was recorded in Emoryville in San Francisco. That was produced by a guy called Eric Drew Feldman. He was in Captain Beef Heart’s Magic Band, he had also produced PJ Harvey and Sparkle Horse and lots of others. I was a big admirer of his, and wanted him in the studio, so I roped him in and we produced our first album which was the Fates. Limited edition, 300 Vinyl. It sold out, and so I got signed to another label, and bought together a bunch of people I really liked. I didn’t want the most proficient group, just good people with interesting ideas.’

‘Performing to me is the only time I feel absolutely confident with my surroundings, comfortable in my own skin. When I’m singing on stage, recording or writing in the studio, generally speaking, it has a therapeutic quality. I sing about a lot of different things and people. They are folk songs, I like to get my voice out there, and if people listen, great. I’ve had a modicum of success over here in Birmingham and also in the United states. I sold records. Never really tried to be a pop star, though I flirted with it in my younger years. In recent times the encouragement has come from playing shows in France. I’ve always been a Francophile, and plan to go back often to perform, taking a little bit of Birmingham, and San Francisco with me.’

At this point Ted praises Brum Radio and it’s team for providing avenues to discover music and creative culture in Birmingham. We made our way back down stairs and let the evening roll in as we discuss Ted’s plans in France, in California, back here and beyond.

I took away that Ted has stayed true to his travelling soul whilst maintaining his connections with his Brum roots, and is now entering an exciting season of his musical career. He works well with others and is always on the look out for inspiration from local scenes. I hope to catch more of his shows, whether here or in France someday soon, if the dreaded Brexit will allow.

The new album from Matthew Edwards & The Unfortunates ‘Birmingham Poets’ is released 5th April on the December Square label.