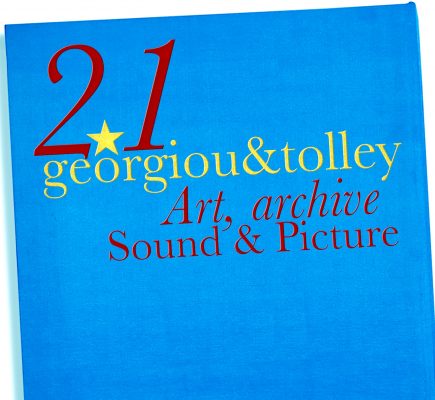 Hinterland: Renegotiating the Archive Sound and Picture Poems
By Darryl Georgiou and Rebekah Tolley-Georgiou

Part of Creative Multilingualism / Slanguages, an AHRC funded project, led by Oxford University, investigating connections between linguistic diversity and creativity. Hinterland means many things. Hinterland: Renegotiating the Archive – Sound & Picture Poems, explores the notion of multilingualism, cross-cultural encounters, and the ‘untranslatable’; a project to fill the holes in language and visualise something when language isn’t quite enough.

Hinterland consists of new contemporary artworks, made in response to artist/educator Darryl Georgiou’s personal photographic/film/sound/image archive. The archive, entitled Mercia B21, largely documents the English Midlands (Mercia) and comprises a repository of 5000 analogue photo-images and 100 hours of cine-film, captured in Georgiou’s birthplace, Handsworth (10/07/81-10/07/90). It also includes digital sound recordings and artefacts (1990-2005) as well as audio-visual material captured in Coventry, where he has worked since 2000.

One of Georgiou’s archive photographs, Buffet Tariff (Villa Cross Tavern), itself based on an original artifact sourced from the Villa Cross Tavern (a significant landmark in the Handsworth civil disturbances of September 1985), became the departure point for a new Sound & Picture Poem audio-visual artwork. Authored by Tolley-Georgiou, ‘Talking Trifle’ is a language-game of sorts, concerned with semiotics. The piece considers visual and verbal language within the context of lexical gaps between image, voice, sound, and text. The practical foundations of the work were laid by conducting a series of workshops, with participants/communities across the Mercian region (and beyond), recording people’s attempts at translating items from a menu board into a range of indigenous dialects, with a particular focus on the term ‘trifle’. The common query, “What is Trifle?”, is a perfect example of the slippage between languages, of ‘what’s lost in translation’. How do you tackle the word ‘trifle’, linguistically? Taking the work beyond just the text, the artists looked at ways beyond language, looking at those lexical gaps, and highlighting something as innocuous as a traditional British dessert. Exploring photography’s capacity to act as a ‘visual language’ and using systems of Dadaist cut up and re-presentation, ‘Talking Trifle’ is also concerned with people and place. Evoking cultural narratives and memory, through superimposed image and text, as a meta-language of infographics, contemporary hieroglyphics, Morse code, dots, and dashes, to represent ideas.

In an undoubtedly altered world, Hinterland is perhaps a hopeful statement of unity, in a time of post-Brexit isolation and COVID-19 quarantine. Whatever the situation or challenging circumstances may be, it’s important for us to connect, communicate, and collaborate. In a broader sense, the project also poses the question: Who writes the history of the future?

“Hinterland is important because it all starts and ends with ‘visual language’. The point being, that we are interested in where and how things connect, change, and transform. Hinterland allows us to join the dots, and create cross-platform stories, ultimately reflecting on the way we live today. Our wider research potentially develops alternative communication systems, coded languages, pictographic, ideographic, signed, or performed. A speech-less language, otherwise known as Art.”

Georgiou & Tolley collaborate as an artist duo. Their ‘socially engaged’ practice often explores the “tension between truth and fiction, history and memory; questioning the way that we map and classify the world, to understand it”. ArtsLab international is an online studio and laboratory, for collaborative art projects, founded by Georgiou & Tolley in 2018. ArtsLab takes as its inspiration The Artist Placement Group (APG), which actively sought to reposition the ‘role of the artist’ within a wider social context, stating that, “context is half the work” ©Georgiou&Tolley 2020

For more info, go to: artslabinternational.com

With thanks to our sound-art collaborator, Brian Duffy.
Hinterland audio content has been broadcast via internet radio (Brum Radio), and its long-form sound collage and radio work will be available via Mixcloud.